David Barton was born in Tabor on August 3, 1964.
He studied at grammar school in Ceske Budejovice, Southern Bohemia, and graduated from the College of Agriculture, Brno.
He has lived in the Bohemian-Moravian Highlands for more than 20 years.
He has been a freelance artist and a curator of dozens of exhibitions of other artists.
In 1998 and 1999, he cooperated with the poet Jiri Dedecek and the director Zdenek Tyc and they created 25 episodes of the TV series ‘A Foreign Word – Poetry’.
Between 2005 and 2010, he was the managing director of the Municipal Gallery in Telč.
He has presented his paintings at approximately ninety exhibitions in the Czech Republic and in Austria. His paintings have been reviewed and critically acclaimed.
He paints mainly the landscape of the Bohemian-Moravian Highlands.
A minor part of David Barton‘s paintings are figurative works inspired by people from the pub and friends from the underground movement. He paints in oil both on hardboard and canvas.
In 2013, David Barton’s paintings accompanied a film “Jako nikdy” (“Like Never”) directed by Zdenek Tyc. It is a story of a dying painter (played by Jiri Schmitzer). More than seventy of David Barton’s paintings were used in the film, some of which were inspired by the landscape round Podmokly, where the film was made.
In 2018, David Barton participated in the project “Normal Life” of the conceptual artist Katerina Seda in Cesky Krumlov, with a theme of the city landscape.
He lives and works in Prague and Telč (Highlands). 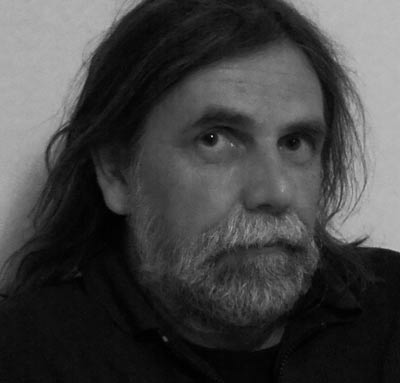